Anything "BOINC" specific can be commented on here...such as Project news and announcements etc. Also: any problems with BOINC or maybe you have found something interesting, tell us about it. Chat about the various 3rd party client applications used for some of the projects such as optimised clients.
Forum rules
Post Reply
5 posts • Page 1 of 1

One of the chaps on the Formula BOINC forum posted the following link and I thought it is a nice piece of "history" that UBT members might like to read:

It's quite long (and sadly it is in white text on black background, (which IMHO) is so not so easy to read).

A long article, If I had to sum it in 10 words ignoring minor triumphs on the way "He gave it a good go but ultimately it failed"
Top

David Anderson did well enough out of it, due to the significant grants he was able to obtain, both from the SETI@home project as well as getting some funding to create the BOINC infrastructure.

But since he stepped away from BOINC development, it has really lacked having a "head honcho" to generate the PR interest, on an on-going basis. And of course, the BOINC (client) software has not really progressed much...as there are still too many limitations preventing people from running the software the way people might like to run it.

For instance, I'd love to be able to set "targets" for named projects, so I'd like to be able to crunch various specific projects until I reach (say) 1m credits on each one...and then to stop crunching those projects when the target has been reached.

And likewise, I'd like better control of which sub-projects I want to crunch directly within BOINC Manager, rather than having to adjust this on each project website.

There is a Discord channel where some BOINC developers "hang out"...but, given that most (all?) are volunteers, there doesn't appear to be any way of getting someone to act on the ideas being put forward and to see it through !

Of course, if a suitable "finacial benefactor" comes forward to "monetise" BOINC crunching that this might "incentivise" people to carry on, but Gridcoin tried this and of course, their "payments" were linked to BOINC credits (IIRC) and of course that meant more people crunching Collatz as they offer the most credits per minute of crunching time ! And that meant other projects (offering fewer credits per task) had fewer volunteers joining up.

Ultimately, BOINC might just "die a slow protracted death", esp with high energy costs now "biting", though I guess a few "stalwarts" will support it until the end.

Wow, this guy really has a few hundred chips on his shoulder, never mind how complimentary he is about something or somebody it nearly always has a little twist of the knife thrown in.

It would appear that Boinc has had a lot of funding one way or another, I'd never have guessed.

Some of his expectations are crazy, what percentage of users are going to run an app that is going to use battery power on their mobile or car? I'm an iPhone user, life is scheduled around my phone's battery far too much already.

Why did he waste time, effort and money developing forum software of which there is no shortage and not provide a stats package which would obviously be a user motivator which should be a prime consideration? 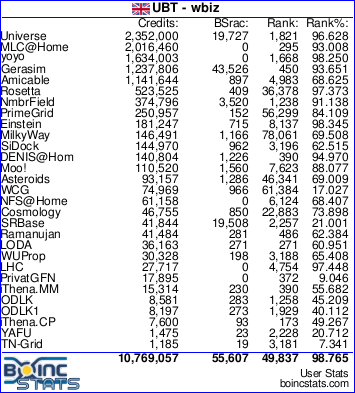 I think Dr A had some mighty big intentions at the start of the BOINC era, in terms of getting support from other "brands"...and using what computer power was available (ack then) to perform fairly straight forward tasks. But that didn't work out.

And over 20 years, Moores Law has meant we now have far more powerful CPUs and the projects want to exploit this...which leds to BOINC being less usable on mobiles. And of course over the 20 years, we've seen that GPUs are better suited to some projects...but they guzzle energy

We now live in different times and I hope BOINC evolves into something better...maybe they should scale it back to only small projects?