Get physical with some of these projects? Asteroids, Cosmology, Einstein, LHC, MilkyWay, Test4Theory,
Forum rules
Post Reply
6 posts • Page 1 of 1

Does anyone have LHC/Virtualbox running on Linux correctly, where Theory and CMS work okay?

I keep getting computational errors in BOINC Manager, and (initally) 'failed to open medium' in Virtual Box (via a popup window).

This is what I ran to setup Virtualbox, which seemed okay (eg the same as the version I installed on Windows):

I noticed in the VB console window that it seems to have 'guest extensions' setup (as I believe this are now part of VB.6.1).

I haven't ran LHC since the sprint last year (September) but it worked fine on my Linux hosts then.

I'm actually running VBox version 5.2.16 (when I run it) There are a couple of messages in the LHC forums saying not to use VirtualBox 6.1.2 as there's problems with it. Stick to 6.1.0 at the latest. Maybe try an earlier version?

The usual problems I have with Linux is access rights to other files/directories. If VBox wasn't installed with Boinc then maybe Boinc is trying to access files it has no rights to?
Top

Its a bit of a strange one, as some tasks (theory) are completing, but others are failing with computational error, and some or all are producing strange VBox error 'failed to open medium'..

I guess as some are completing then its maybe an issue due to how many layers/systems it has to go through. I just posted on the message boards so I will see what they have to say.

Oh I just checked, yeah its 6.1.2.. hmm well being Linux I am not going to bother trying to mess around with different versions.

Sorry i couldn't be more help Chris, I installed VirtualBox when I installed Boinc and haven't upgraded either since, "if it works ..."

I would have thought that LHC could have produced a native Linux version rather than installing a Linux virtual machine on a Linux host!

To be honest it seems to be working okay-ish.... apart from some failed tasks, and these occasional annoying VB error popup windows.

From what I read, they VMd it as there were many libraries/API's etc so it was just easier to package/link all the stuff via a VM.

Yeah its pretty bad, just imagine someone who is using a cloud server, and who is running Windows 10 with a Linux VM, to run LHC..

You actually turned out to be correct Mark, seems the newer version is causing issues. I was advised to go back to v6.0 and that fixed the issues.

This was the main issue: 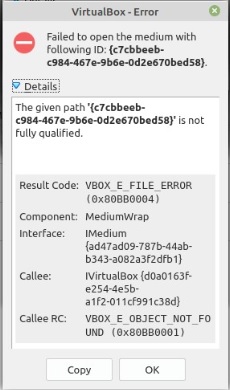 Just incase anyone else has this issue, these are the Linux commands I used:

Remove existing version and its files:

I think half the problem is the progress bar and estimated times don't really work atm so you have to ignore these. Average tasks take around 2 hours, however admins advise just to leave tasks running as 99.9% will complete. I can confirm this as I just had one that completed after 16 hours.

Also another issue is the huge amount of data the tasks continuously download while running. 4 hosts maxed out a 40Mb (down)/10Mb (up) connection! In less than 24 hours these hosts have download over 250GB.

Also there is a period of about 5/10 mins per host when it starts up (and starts downloading its essential data) which puts huge load onto the host, so if you start loads of tasks at the same time you just have to wait 30+ mins for the host to not keep freezing (due to trying to do so many concurrent downloads in the background).

If you keep all these issues in mind, and the 650GB RAM requirement per task, then the Theory tasks work fine.